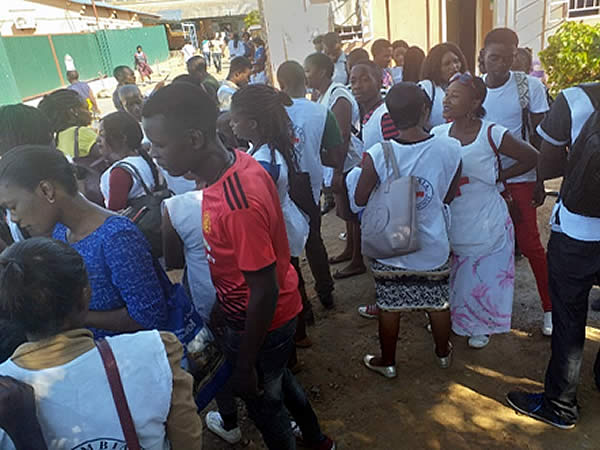 These Children were victims of a Civil War that is currently and consistently occurring in the Democratic Republic of Congo.

ICRC Zimbabwe and ICRC Zambia collaborated in facilitating the repatriation of the 6 Youngsters back to their Country and Family in the Democratic Republic of Congo. The repatriation took place on the 23rd of February 2019.

The following are the stories of their Journeys from the Congo and into Zambia:

Juliet originally comes from Mutabi Village. On one of the mornings, she was in Class with all the other Class mates. The teacher had left the classroom and as they were waiting for him to come back, they heard some one shouting from the outside, that they should leave the Classroom and run, because the Rebels were in the Camp and killing everyone.

Juliet ran out of the Classroom with all her friends and she headed back to her home in the Village. What she found in her home was disheartening. Her Mother and Father had been axed and were lying on the floor, dead. There was pandemonium in the Village and people were shouting out that they should flee the Camp otherwise they would also die. Together with her Brother they fled the Village and followed a group of other Villagers who were also fleeing the Village into the Bush. The route that they used in the Bush enabled them to cross the border and thus, they found themselves on the Zambian side.

The group was directed to go to Kenani Refugee Camp on the Zambian side where they found Zambia Red Cross Volunteers. They registered themselves with Red Cross and were issued with pots to use. Her Brother told her they should leave the Camp and stay in the Village. Juliet says she refused because she believed that her Brother wanted to sell her off to the Villagers. Her Brother had sold all the pots and plates that were given to them, to the Villagers.

Later her and her Brother were repatriated to Manatapala. Juliet stayed with a Foster parent who is a Section Leader in the Camp. Her Brother ran away from the Camp and said he was going back to the Congo. Zambia Red Cross helped her out with items of clothing.
REPATRIATION TO THE DEMOCRATIC REPUBLIC OF CONGO
At the time of repatriation, Julliets eyesight had literally gone, and she looked forward to going to see an optician. Hopefully her eyesight will be restored. Restoring Family Links had managed to trace her Aunty in Congo DR and that is where she will stay.

Joseph found himself in Manatapala because there was a war in his Village. People were killing each other, and this caused him to flee the Village.
Joseph comes from Moba Village in the Democratic Republic of Congo. Whilst he was in Class at the Village, Rebels came to the school and began to kill people. Joseph says he ran to his Village and found that everyone had gone. He found his family, Mother and Father and Sister were all gone and the goods in the house were all scattered on the floor.
He was told that everyone was fleeing into the Bush to hide. He ran to the Bush and amongst the many that were there, he did not locate his family. The group of Villagers that had escaped into the Bush trekked to the Congo DR Border where the Border Officials told them to go back to their Village telling them that things were fine. The group detoured into Zambia and were guided by the Villagers to go to Kenani where they found Zambia Red Cross Volunteers. As they wen to Kenani Refugee Camp, Joseph looked for his family and could not find them.
MANTAPALA REFUGEE CAMP

Later they were repatriated to Manatapala Refugee Camp. Again, Joseph looked for his family but could not find them. Fortunately, as Joseph ran from the Village, he had a phone with him and it is on this phone that his father called him four months later. Joseph alerted the Red Cross Volunteers and so the process began for reunification with his family.
Joseph stayed in the Camp for 1year and two months. He says Red Cross looked after him well as he had something to eat, and he went to school.
Joseph was excited that he would once again re-unite with his family.

Yobu, an enthusiastic and excited young man, sang loudly and chatted excitedly with the other youngsters on the way to Chipungu Border Post. I asked him why he was so noisy, and he said it is because I am so happy that I am going home.

In the Village of Mbote a group of Rebels arrived and accused the Village of harboring a Soldier from the opposition. They went on a sporadic massacre of Villagers. Yobu says many Villagers were in hiding and many, those who could, ran away. Many of the Villagers ran into the Bush and were blindly running in the Bush.

At the time this was happening in the Village his parents were in the family field, farming with other Villagers. Yobu ran from the Village with his Uncle and three older brothers. When they got to the Zambian side, through the Bush, they met up with Red Cross Volunteers in Kenani Transit Centre, who registered them. Whilst in Kenani transit Centre, he heard from the Volunteer that if they had family in Congo DR, they could get in touch. Yobu managed to speak to his family on the phone and the process of re-unification began.

Kamuna and Mwashile are Sister and brother, respectively. Kamuna says she was washing dishes whilst her brother was playing near by in Kwambula Village in the Democratic Republic of Congo. They lived with and were brought up by a neighbor since both her parents died of an illness.
As she was washing dishes people began to shout that the Rebels will kill us, and we were told to run. Kamuna stopped washing dishes, got hold of her brothers’ hand and began to run to the bush. She says we were many and we just started running in the bush heading for what they said was the border. Kamuna says I was scared, and I was crying but continued to hold onto my brother who was also crying.
They walked throughvast kilometers of bush and finally ended up at Kenani Transit Centre. She says the Red Cross Volunteers took down our names and took us into the Camp. Later they were relocated to Manatapala Refugee Camp. In the Camp they stayed with foster parents until the time of relocation.
In Manatapala, Zambia Red Cross in conjunction with Congo DR Red Cross was able to link up the siblings to their Grandmother in the Congo DR.

Mwashile was anxious and failed to eat his lunch as the convoy repatriated them to Chipungu Border Post, between Zambia and Congo DR. Once at the Border Post, his spirits lifted, and he seemed more at ease and happier!

CIPHA KAPOLO – AGED 17
Moba Village is Cipha’s birthplace. Cipha was sent to stay with her Auntie in Kwampweto so that she could go to school there. The Auntie she stayed with in Kwampweto is the young Sister to her Mother.
Cipha says I was in the Village in Kwampweto whilst my Auntie had gone to her Cassava field. The Rebels came to our Village and told us to leave the Village Cipha with scores of other Villagers ran into the Bushes, where they began their long and tedious trek to the Border. They used a route that led them to a Village on the Zambian side called Lupiya.Cipha says she thought she would find her Auntie there as well.
Red Cross Volunteers were in the Village taking registration of other Refugees that had also fled the Congo DR. Cipha registered with them and they were then taken to Kenani Transit Centre in December 2017. After a month she was re-located to Mantapala.
Cipha says she told the Red Cross Volunteers where she stayed in Moba and she was told to write a letter to her Parents. The letter was taken and delivered to her Parents in Congo through the Tracing Program and Red Cross managed to locate her Parents who then replied her letter. She says her Father replied thus to her latter, “We are very happy to know that you are fine, and that Red Cross will be bringing you home. We shall wait for them to bring you”

Figure 5:Cipha Kapolo
I am very happy to be going home today said Cipha, I will meet my Family!